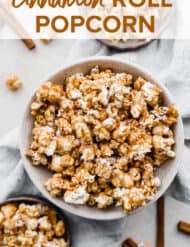 Did you know, you can have cinnamon rolls in popcorn form? It’s true! This Cinnamon Roll Popcorn recipe tastes *just* like a cinnamon roll! It’s so yummy it’ll blow your mind slash you’ll be 1000% obsessed and come close to eating half the bowl, if not the entire thing! 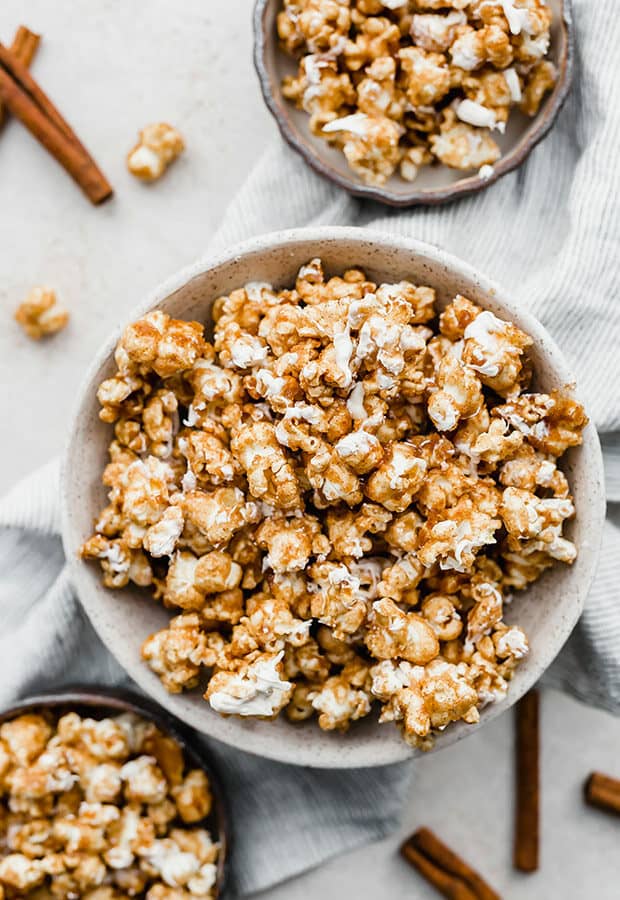 I need to be honest with you, cinnamon is my favorite spice of all time. I want to put it in so many recipes. And I have! Here are a few… cinnamon roll cake, cinnamon chip pancakes, and cinnamon roasted butternut squash.

But I have to say, this Cinnabon inspired popcorn is complete genius. It’s a cousin to baked caramel popcorn; the cinnamon sugar mixture is tossed in the popcorn and baked in the oven to set it.

As a result the cinnamon popcorn turns nice and crisp; it’s not overly sticky nor is it hard. This recipe strikes a perfect balance between the world of cinnamon rolls and popcorn.

I hope you give it a go! If you do, I’d love if you leave a rating and review in the comments!

And can I just say this would make the perfect holiday treat/gifts to friends and family. 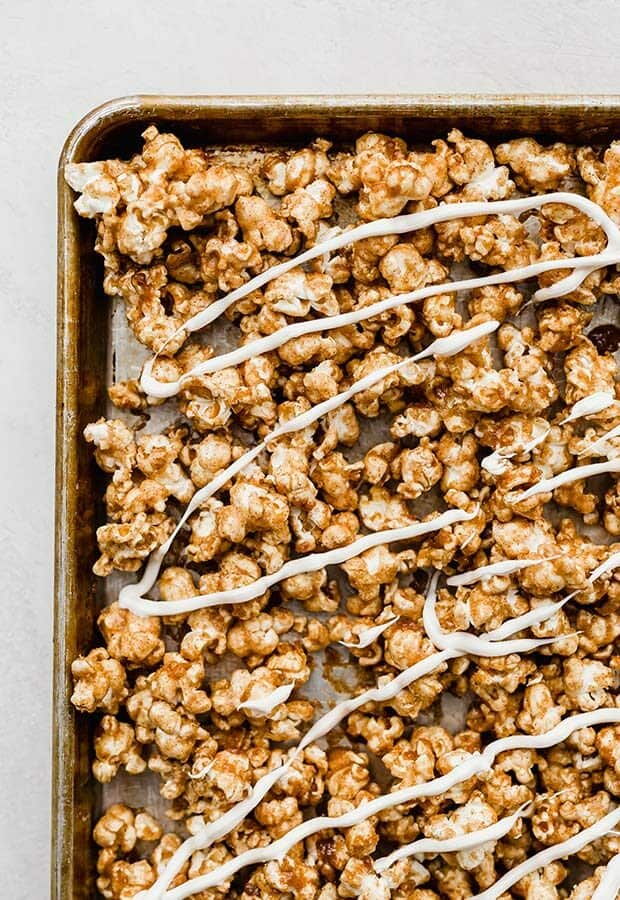 How to make Cinnamon Roll Popcorn

You need 10 cups of popped popcorn. How you get the popcorn popped is up to you. I use an air popper and it works like a charm.

To make the sauce, add the brown sugar, butter, corn syrup, and salt to a saucepan. Place over medium heat and bring the mixture to a rolling boil, stirring frequently. 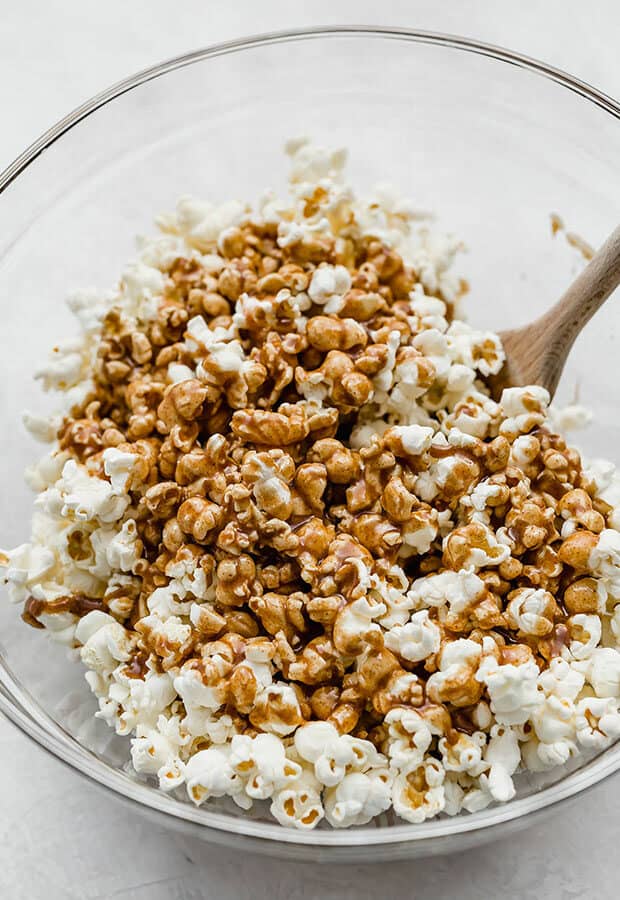 Remove from the heat and stir the mixture for 1 minute to cool slightly.

Add the cinnamon, vanilla, and baking powder to the sugar/butter mixture. Stir to combine. 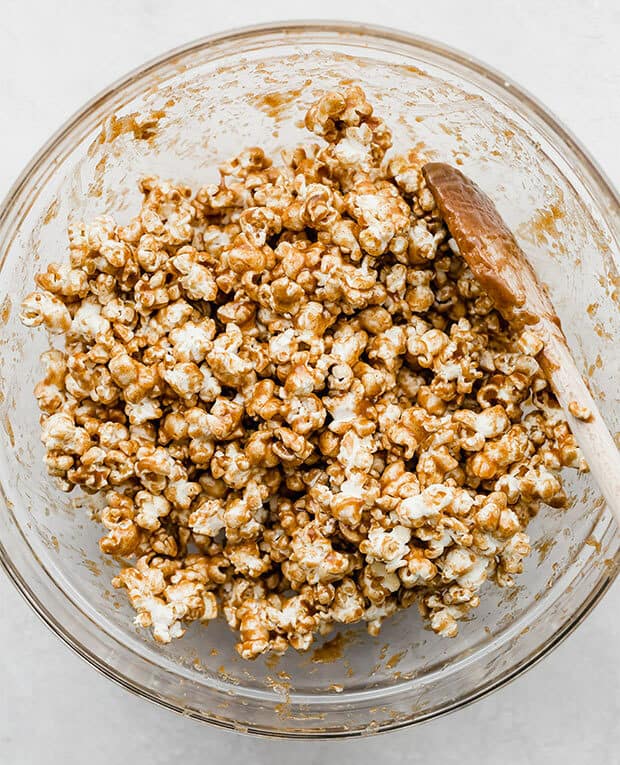 Pour the cinnamon sugar mixture over the popcorn and toss to coat.

Spread the popcorn mixture in a single layer on a greased or parchment lined baking sheet.

Bake the popcorn for 10-12 minutes or until the sugar coating is set.

Pro tip: don’t over bake otherwise the popcorn will be HARD. 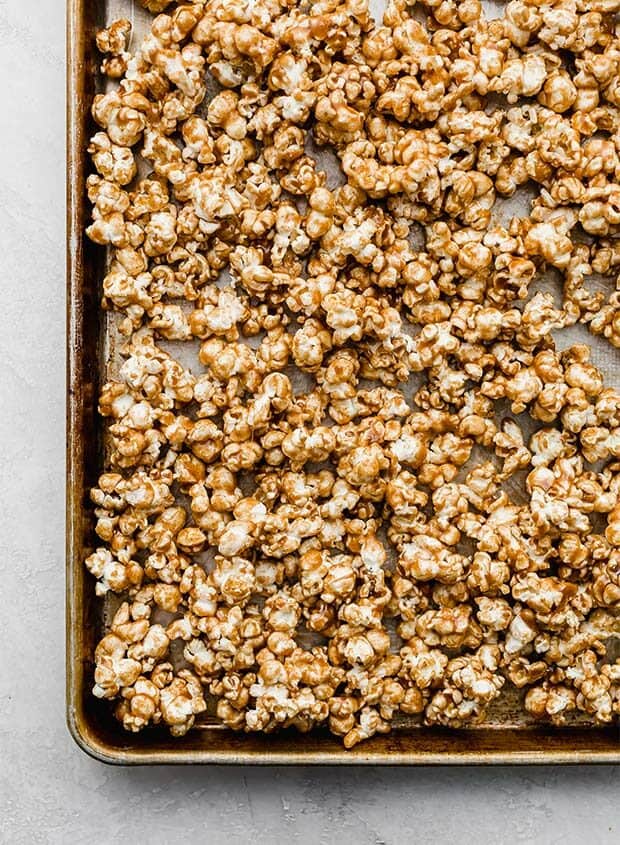 Remove the popcorn from the oven and allow it to cool slightly. Drizzle melted almond bark over the popcorn. Let set and then serve! 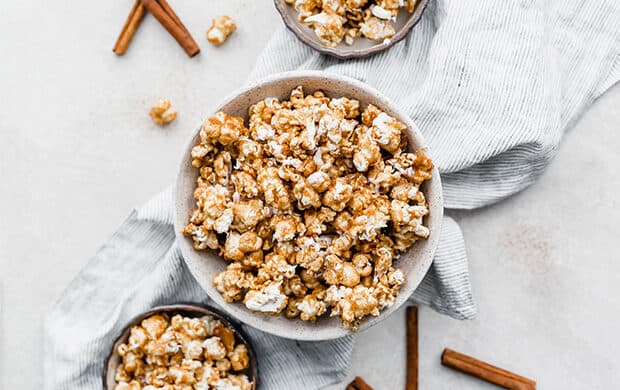 Cinnamon Roll Popcorn lasts for like 10 minutes, or however fast you can eat it. But if for some reason you don’t eat all of it in one sitting, store it in an airtight container at room temperature for 7-10 days.

Did you make this recipe? I’d love to hear what you thought! Leave a rating and comment below. Thank you!

Also, don’t forget to SUBSCRIBE to Salt & Baker. You’ll receive a delicious recipe in your inbox each week. 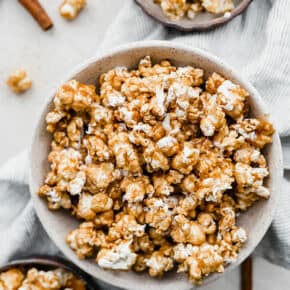 Calories: 476kcalCarbohydrates: 73gProtein: 3gFat: 20gSaturated Fat: 14gCholesterol: 41mgSodium: 354mgPotassium: 143mgFiber: 3gSugar: 57gVitamin A: 509IUCalcium: 65mgIron: 1mg
Did you make this recipe?snap a photo and tag @saltandbaker in your posts and stories so I can see what you're making! 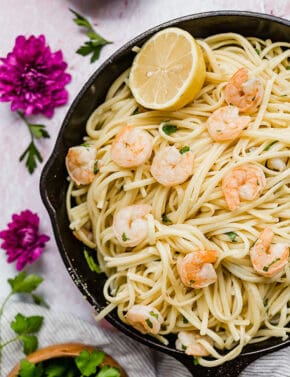 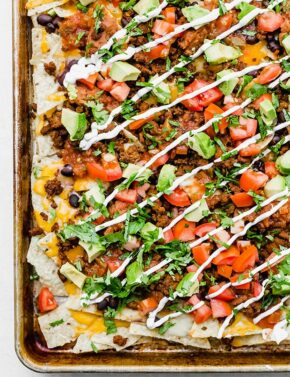 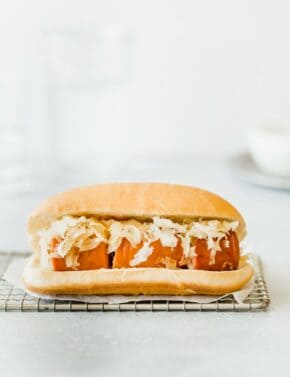 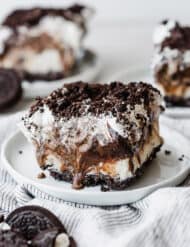