Jump to Recipe
by Whitney // December 3, 2019 (updated March 16, 2022)
This post may include affiliate links. As an Amazon Associate I earn from qualifying purchases. 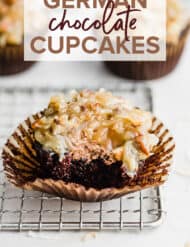 I will do my best to contain my excitement, but I’m not lying when I say “These are THE BEST German Chocolate Cupcakes you’ll ever have!” The chocolate cake is so moist and tender; the toasted coconut pecan frosting has a perfect consistency, not too stiff and not too runny. Also, we use toasted coconut and toasted pecans for the frosting which makes a big difference. Last but not least, we remove the core of the cupcake and fill it with a whipped chocolate mousse. I mean, come on, what could be better than that?

You guys, I get excited over the littlest things, chocolate being one of them. And when I say chocolate, I mean making delicious recipes that have chocolate in them.

I’ve had a major obsession with chocolate cake recently, like this Texas sheet cake that practically melts in your mouth, or this super moist chocolate cake recipe, or how about basic chocolate cupcakes topped with an American chocolate buttercream, and these chocolate crinkle cookies and last but not least a long time reader favorite — double chocolate chip cookies.

How to make German Chocolate Cupcakes

Start by making the cupcake batter.

Pro tip: Use a stand mixer for this recipe. There’s a lot of mixing involved with the cupcake batter and especially the whipped chocolate mousse.

In a medium bowl, or large liquid measuring cup, while the egg, room temperature buttermilk, hot water (or coffee), oil, and vanilla.

Baker’s tip: I used hot water for these German Chocolate cupcakes, however hot coffee is a great alternative. Coffee is known to accentuate chocolate flavor, so if you’re a coffee drink, use coffee! I don’t drink coffee so I used water.

Add the wet ingredients to the dry ingredients and mix on medium speed for 2 minutes. Stop the mixer. Using a rubber spatula, scape the sides of the bowl to ensure all of the ingredients are evenly mixed. Turn the mixer to medium speed and mix for an additional 30 seconds.

Pour the batter into a cupcake pan that has been lined with cupcake liners.

Pro tip: Only fill the liners half full or about 2/3 full. The cupcakes will rise quite a bit in the oven so to avoid spillage, refrain from overfilling the liners.

Remove the cupcakes from the oven and allow to cool in pan for 10 minutes then transfer to a wire rack to cool completely.

Remove the Core of the Cupcake

If you’re like me and you don’t own one I have an easy tip.

Fill the centers of each cupcake with a generous amount of whipped chocolate mousse.

Tip for making the chocolate mousse: use a stand mixer. While a hand mixer will work just fine, the stand mixer makes the process smooth.

With the whisk attachment, whip the butter on medium speed for 4 minutes. Reduce the speed and add in the powdered sugar. Once that’s somewhat combined add the vanilla extract and melted chocolate. Whip at medium high speed for 1 minute.

Place the frosting in a piping bag.

The biggest tip I have for you when it comes to making this particular frosting recipe is to use toasted coconut and toasted pecans.

I’ve made this frosting without toasted coconut and it didn’t work. The texture was way off! Toasting coconut is really easy, I have an easy and straight forward guide to toasting coconut so be sure to check it out.

To make the frosting whisk the cream, sugar, egg yolks, and salt in a saucepan over medium heat stirring occasionally. The mixture will come to a low boil. Cook until it has thickened. Once thick, remove from the heat and add the butter, vanilla, toasted coconut and pecans.

Set aside the frosting to cool to room temperature.

Pro tip: Make the frosting while the cupcakes are in the oven. This way the coconut pecan frosting and the cupcakes can be cooling at the same time.

All that’s left to do is spoon a generous amount of toasted coconut pecan frosting overtop of each cupcake.

If you make this recipe or any other recipe on Salt & Baker, I would love for you to come back and leave a rating and review! Thank you so so much! 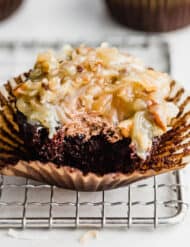 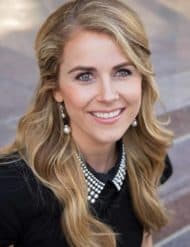 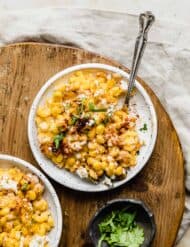 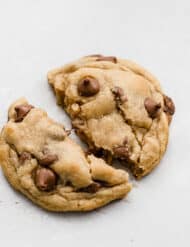 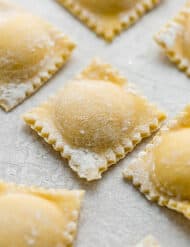 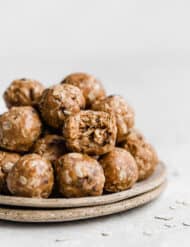 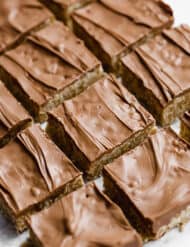 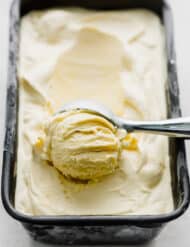 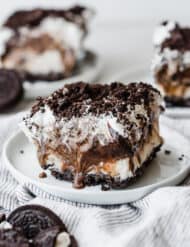 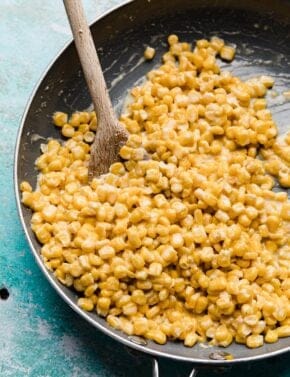 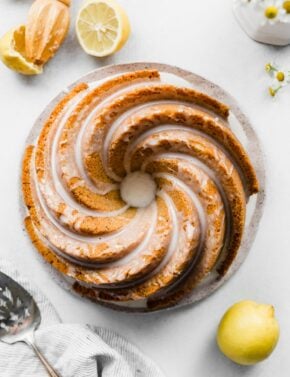 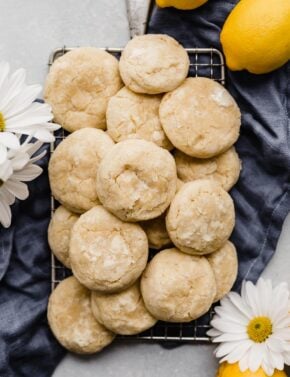 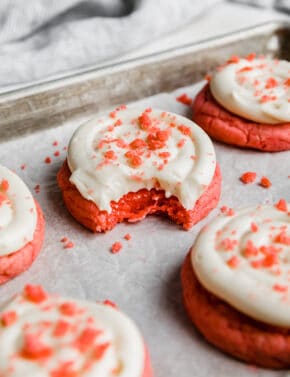 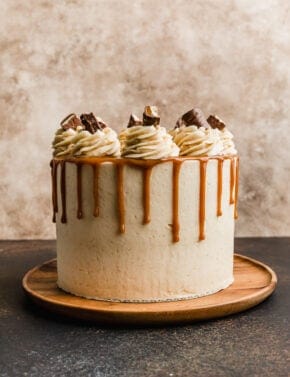 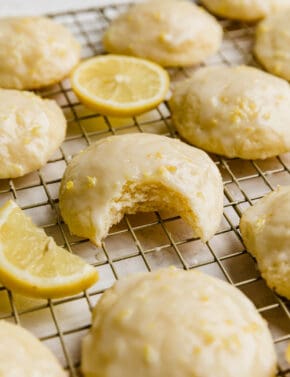